‘I got a divorce and went into therapy’: Jennifer Aniston jokes about Brad Pitt split she returns for Ellen DeGeneres’ final show 19 years after being first ever guest

Jennifer Aniston returned to The Ellen DeGeneres Show on its final episode, 19 years after being the show’s very first guest back in 2003.

The actress, 53, reflected on how she coped with the end of Friends during her chat with Ellen, joking she ‘leaned into’ ending things — including her marriage to Brad Pitt.

‘I got a divorce and went into therapy. Oh, and then I did a movie called The Break-Up. I just kinda leaned into the end. I just was like, «You know what guys, let’s just make this a completely new chapter,»‘ she said.

‘It worked great!’ Jennifer said, emphasizing ‘great’ to the amusement of Ellen and the audience. 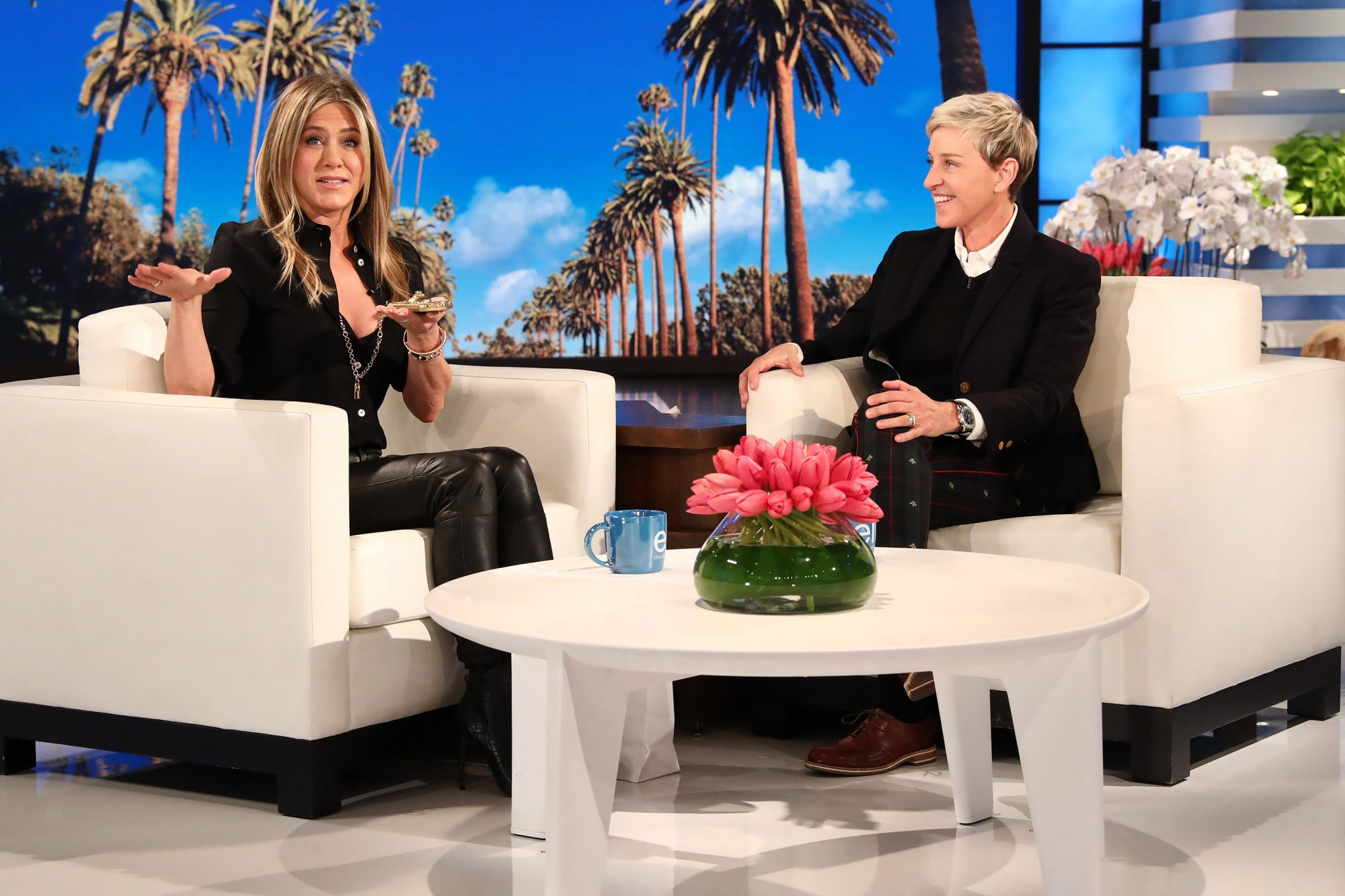 Jennifer divorced Brad after five years of marriage in 2005, a year after ending Friends.

The ending of their marriage coincided with Pitt meeting Angelina Jolie on the set of Mr And Mrs Smith, prompting rumors to swirl that he had stepped out on Jennifer.

Jennifer subsequently starred opposite Vince Vaughn in The Break-Up, which followed a newly split up couple battling it out for the condo they shared during their relationship. 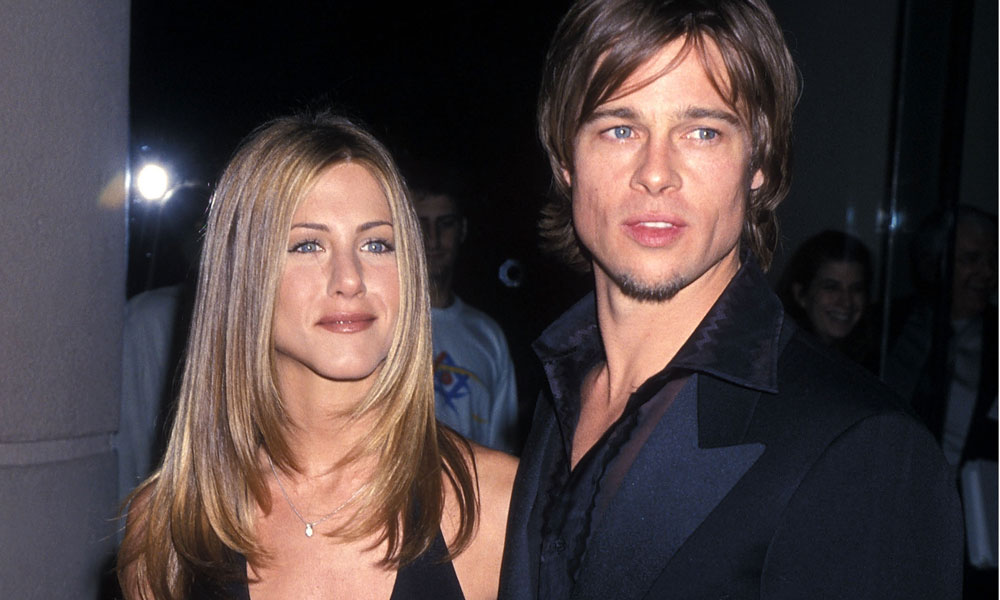 Despite their tumultuous history, Jennifer has insisted she and Brad are friends and the exes even landed at the center of reconciliation speculation in recent years.

'Brad and I are buddies, we're friends...And we speak,' Jennifer told Howard Stern on his show last year.

Jennifer, who was the very first guest on Ellen's first episode back in 2003, also reflected on their first interview with the departing talk show host during her appearance. 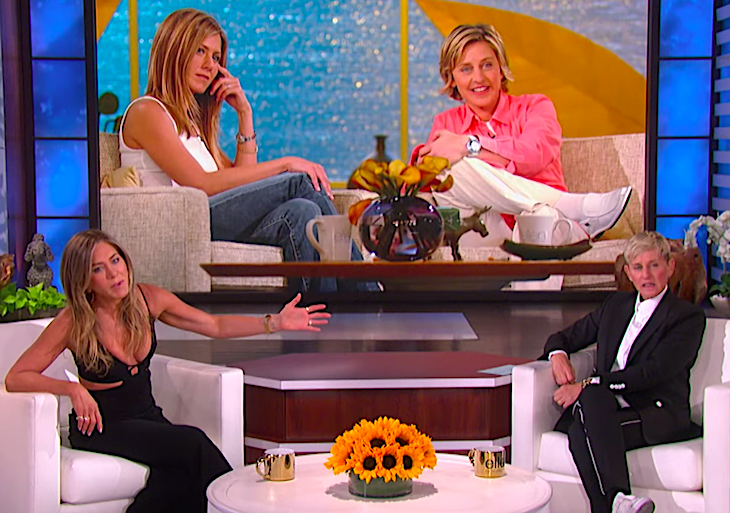 'Well obviously what we wore. I remember I didn't have a stylist, I wore a pair of 7 jeans and a white... tank top... handing you that gosh dang welcome mat that's just never here. 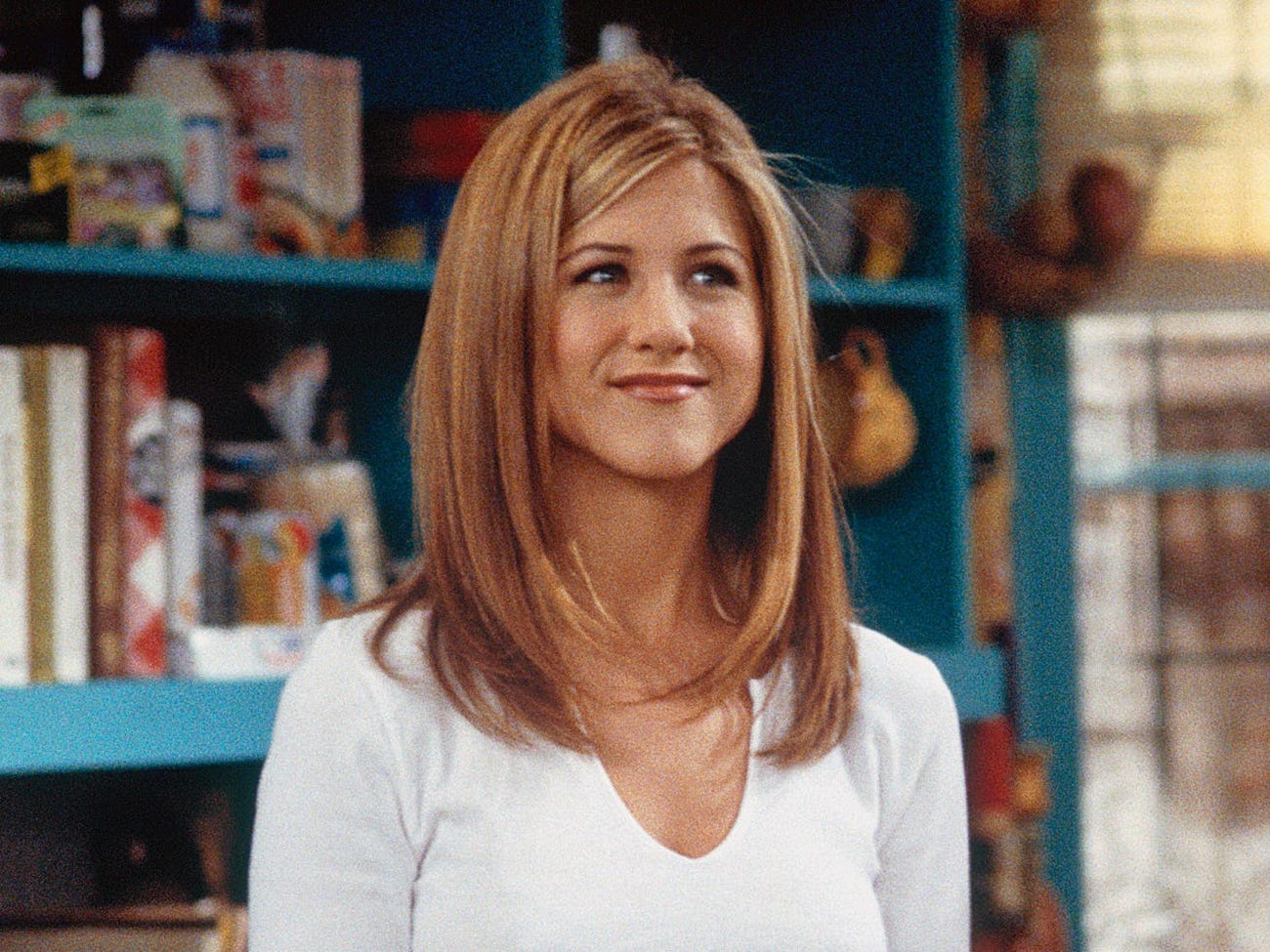 'Oh, and there was your pink blouse. You had that golfer vibe going on. Gosh, that first show, we really kinda set the tone for some extraordinary television for the next 19 years,' Jennifer said.

'The conversation, I believe the conversation we had was so real, it did set up,' Ellen said before pulling up a clip of them talking about toilet paper.

'These are issues we need to discuss and talk about,' Jennifer said. 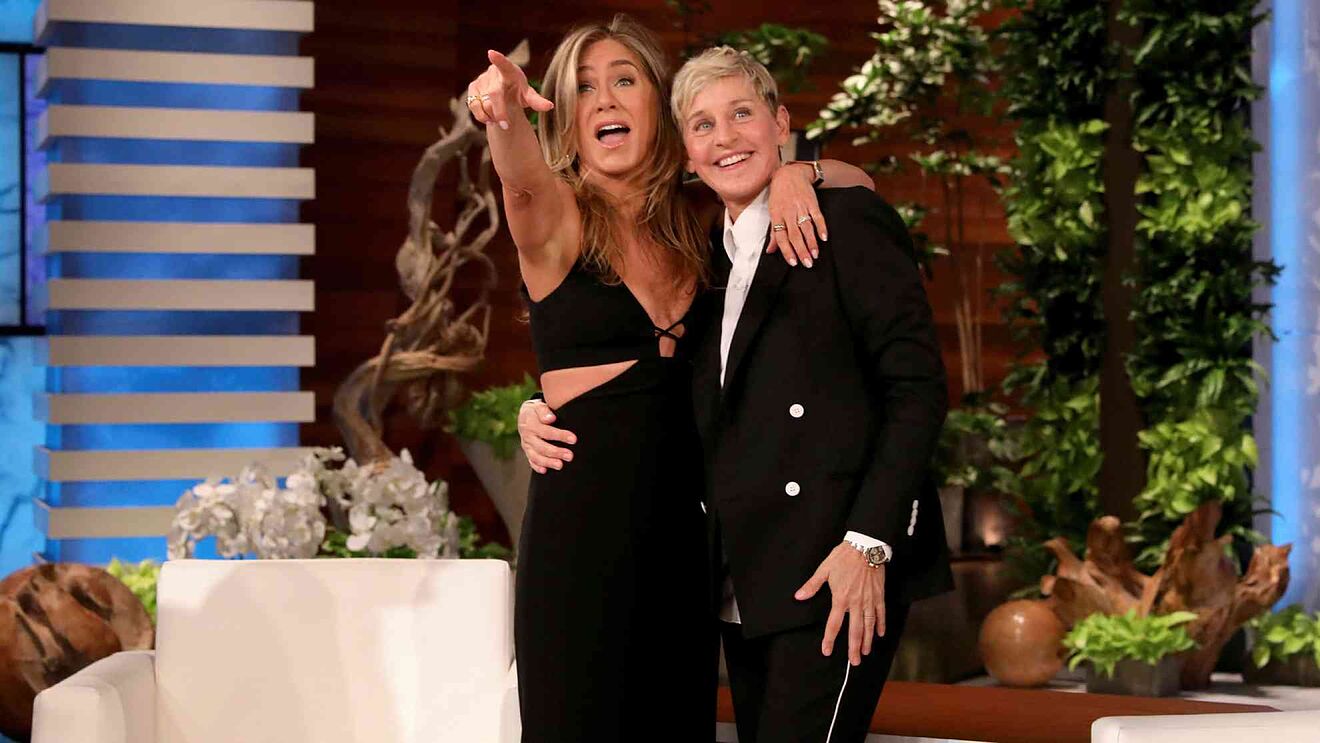 'Would love for you to get back into stand-up,' Jennifer said as the audience expressed their approval. 'I love your stand up. I'd love to see you act again,' she continued. 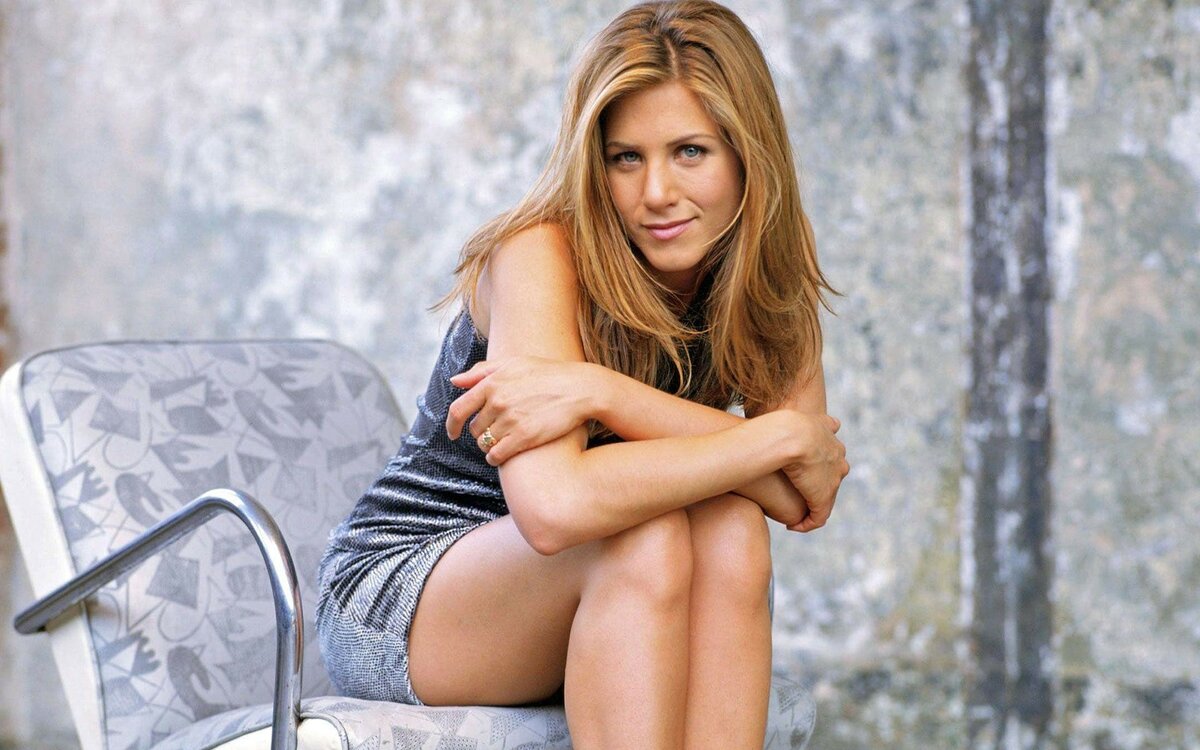 'Well, I could give you a job. I'm definitely looking for people. My house needs a lot of odds and ends done,' Jennifer said before Ellen shot down that idea and introduced a commercial break.

'See, this is what I'm worried about. In real life now, I can only talk now for five minute chunks, and I'm going to say, "Sorry, I have to take a break" and walk away,' Ellen joked. 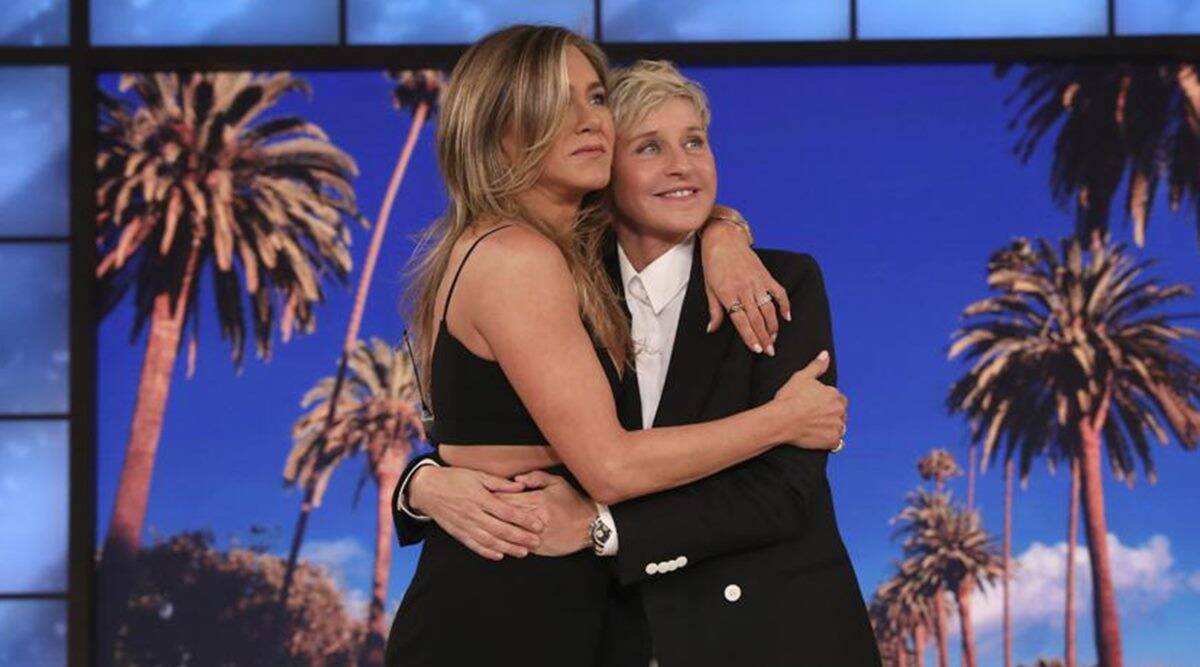 РЕКЛАМА
If You're Over 50, Sleeping in This Position Is Aging You, Experts Warn
You Won't Believe How Grown Up the This Is Us Kids Look
Charlize Theron Is Reportedly "Hooking Up" With Gabriel Aubry
Top 7 Most Useful Animals To Humankind
Sophie Turner Opened up About How Becoming a Mom Has Impacted Her Career
Courtney Love Expresses Regret About Her Message of Support for Johnny Depp